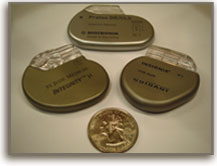 Normal cardiac function depends upon timely generation and rapid conduction of electrical impulses to control the heartbeat. Abnormalities of impulse generation or conduction may result in low heart rates or “dropped beats” that can cause weakness, shortness of breath, dizziness, and loss of consciousness (“syncope”). In the current era, there is no surgery available to directly repair diseased cardiac electrical tissue.

Pacemakers are small, implantable devices that create an electrical bridge across zones of diseased electrical tissue. These technically sophisticated devices are capable of detecting impulses “upstream” and delivering them “downstream” if the natural electrical system fails to do so. Pacemakers also function as impulse generators for patients who have abnormally slow impulse generation but normal electrical conduction. Our cardiologists can easily and noninvasively interrogate your pacemaker and perform customized reprogramming as necessary during a routine office visit.

Patients with certain forms of congestive heart failure may obtain dramatic improvement with pacemakers. Heart failure is often associated with uncoordinated function between the right and left sides of the heart, making heart failure symptoms even worse. Special pacemakers can be implanted that “resynchronize” or restore coordinated activity to the heart, leading to a significant reduction in symptoms as well as improved survival. Such resynchronization therapy is often accomplished using an advanced pacing device known as an implantable cardioverter defibrillator, or “ICD” (Electrophysiologic Testing, Defibrillators and Ablation).

Pacemaker and defibrillator implantation procedures are performed at the hospital under sterile technique and with the assistance of fluoroscopic imaging. These procedures typically only require local anesthesia, although under some circumstances general anesthesia may be used. Patients are observed overnight in the hospital to guard against any potential problems, such as bleeding or postoperative fever. Our experienced cardiologists who have privileges to perform these procedures will discuss which device is correct for you.

Patient Instructions Before Testing and Procedures